Fish species in the Gulf of Carpentaria – Karumba & Normanton areas

The Lates calcarifer, better known as the Barramundi is one of Australia’s most splendid sportfish. A striking silver, large scaled and predatory fish, the barramundi can grow to huge sizes, with specimens recorded over 45kg and up to 150cm (1.5 metre) in length. A common saying is one that the ‘one metre barra’ is equivalent to the ‘1000 pound black marlin’. Barramundi are protoandrous hermaphrodites: they start life as males, reaching maturity at around 3 to 4 years of age and later change gender and become females. The barramundi will spawn between the months of September and March, which is why the barramundi has an open/closed fishing season.

The barramundi occupies a wide variety of habitats in rivers, creeks and estuaries in clear to turbid slow moving or still waters. They enjoy hiding/living around submerged logs, rock ledges and other structure in the water.

Barramundi are ambush feeders, lying still until pray come with-in striking distance and then they spring to life. Inhaling their pray, or in the case of fishing, inhaling the lure, leads to the distinct ‘boof’ sound of the barramundi. When hooked on a lure, the barramundi will quite often make spectacular leaps from the water throughout the battle and make long, powerful runs. This is why it’s one of the most sought after sportfish.

The most iconic fish in the Gulf of Carpentaria, the barramundi has also gained a reputation as one of Australia’s finest eating fish.

The more common species of threadfin in the Gulf of Carpentaria is the king salmon. Threadfin salmon are marine fish that prefer inshore coastal waters and tidal rivers. They are attracted to mud flats, muddy rivers and creeks with sunken timber and form large schools during autumn and spring. 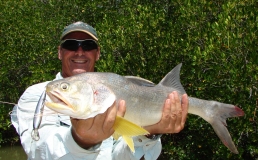 Threadfins are often seen breaking the surface as they feed in the shallows near the water’s edge in the lower river reaches and estuaries. Capable of amazing speed and agility, they can grow larger than 15kg but usually weigh 1-4kg.

These fish have large mouths and have the ability to throw the hook so once the bait is taken the angler needs to wait until the fish moves away and swallows it before setting the hook. They are a great fighting fish with hard runs and high, lure-shaking jumps.

Threadfin are a first-class table fish and, eaten fresh, are regarded as near equal to the barramundi.

The Saratoga fish generally occupies the upper reaches of fast-flowing streams and still billabongs – deep muddy holes with over hanging vegetation. Found in good numbers in water holes/billabongs north of Karumba & Normanton in the Gulf of Carpentaria, the saratoga is dark brown along the back, graduating to a pink belly. Their body is relatively flat across the top half of the body with their eyes on the top of the head indicating they are a surface feeding fish (keep this in mind if targeting them). Saratoga’s are solitary fish and are very territorial and aggressive to other members of their species, with captured specimens often exhibiting scars of past battles. Commonly captured at 60cm, they can grow up to 100cm and 4-5kg in weight.

Saratoga’s are renowned for their willingness to take baits, lures and flies and make for spectacular jumping performances and fight. Their hard, bony mouths make hooking and landing them a little difficult, so sharp hooks are a must for these fish!

The Saratoga is not generally considered a table fish due to the presence of numerous fine bones.

Black jewfish are distinguished by their large size and silver/grey colouring. A golden hue may be evident on estuary caught fish. Juvenile fish have five dark bars along the back and many black spots on the upper half of their body, dorsal fin and tail. 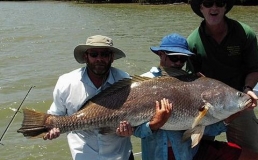 Black jewfish can be found congregating in shoals off shore, usually in water up to 60-70m, and can be found in creek, river and estuarine systems. They prefer soft bottoms in deep water but don’t be afraid of fishing a bottom that has some rubble. Black jewfish can grow to around 45kg and 1.5 metres in length, however the common caught size is 80cm.

Not only are they fun to catch but they are great to eat, however size and bag limits do apply for the Gulf of Carpentaria area.

The barred javelin fish, also known as the spotted grunter , javelin fish, or grunter bream, is commonly 45cm in length and 2-4 kg. However they can reach up to 80cm in length and 7kg in weight. Adults have a golden-green back, silvery belly with traces of brown vertical bars. The juvenile has a brilliant silvery green back with golden silver sides and a silvery white belly, with 12 or more faint vertical bars that comprise small dark brown spots or irregular blotches.

Barred javelin can be found close to coastal waters in bays, estuaries, tidal rivers and creeks as well as rock and coral reefs closer to shore. Anglers will spend many hours working the sand bars and channels throughout the estuary system targeting this fish, as it is a hard, powerful fighter offering good sport on light to medium tackle.

Barred javelin fish will take most baits including, squid, fish baits such as pilchards or prawns.

The barred javelin is a soft white flesh fish and excellent eating, however like the black jewfish, size and bag limits apply

The scaly jewfish, also referred to as the jewel fish, has an elongated body, distinctly bulbous nose with underslung jaw, and a yellowish tail and ventral fins. The scaly jewfish species is commonly misidentified as the silver jewfish and/or black jewfish.

Caught with various types of bait, this fish can also be caught in large numbers when they are schooling.

The scaly jewfish provides the angler with a good sportfish match on light gear.

Within the Gulf of Carpentaria, size limits will apply to the scaly jewfish.