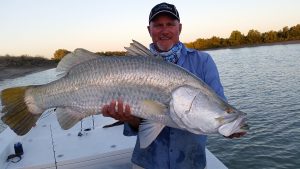 Owner and leading fishing guide for Carpentaria Barra and Sport Fishing Charters, Gavin New has been involved in fishing all his life. Gavin New, best known in the sport fishing industry as “Groover”, has laid his hand to many types of sport fishing including barramundi, game fishing, bottom fishing, fly fishing and various other estuary and river fishing.

As a young adult, Gavin ‘Groover’ New spent a lot of time with Andrew Mead, owner/operator of Aussie Barra Charters in Townsville, Queensland. A long-time friend and fishing partner to Groover, Andrew setup Gavin for his journey in becoming a quality Fishing Guide. 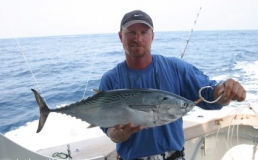 The giant black marlin season always created a sense of satisfaction for Groover by having the opportunity to teach anglers how to fish; seeing giant sized black marlins, including the famous ‘granders’ being landed; and developing relationships with anglers from across Australia, and the world. Meanwhile, the river guiding journey began for Gavin when he joined Terry Holman, owner of Fish Hunter, many years ago. The experience enabled Groover to provide guided river fishing to both novice and conditioned anglers all along the East Coast of Far North Queensland.

Bait fishing, casting and trolling for barramundi, mangrove jack, sooty grunter and jungle perch were just some of the fish teased up.

During Gavin’s several fishing seasons with Allan ‘Fish’ Philliskirk, from Fish’s Fly & Sport Fishing operation based in Weipa, Groover became the sought after barramundi fishing guide in the Gulf. From March to November the barramundi is the hunted sportfish in North Queensland and the Gulf of Carpentaria, and Gavin was able to lead his anglers to the fish – casting, trolling or fly fishing!  With many keen sport fishing anglers returning each year to spend their fishing days with Groover, it became the experience so many people were chasing – incredible fishing with an avid and passionate fishing guide. 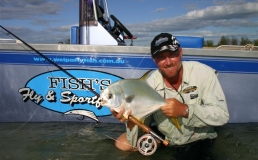 Whilst skippering the luxurious 70ft white boat Allure for many years, Gavin had the pleasure of not only being the captain of Allure, but also the main fishing guide aboard Allure’s tenders. Fishing Queensland’s East Coast of Australia around to the Gulf of Carpentaria and Arnhem Land, the sport fishing of many barramundi’s, and all other tropical species and reef fish were caught. With the ability to anchor up just about anywhere and utilise Allure as a ‘mothership’, the fishing locations and the great barramundi and sport fishing experience was exhilarating for everyone that stepped aboard Allure (and its tenders). Gavin also managed the Staaten River Fishing & Wilderness Lodge in the Gulf of Carpentaria. Managing the day to day operations of the secluded and exclusive fishing lodge, Gavin and his staff aimed to provide guests with a fine-class sanctuary setting each night, and deliver the great barramundi experience to their sport fishing enthusiasts – both in size (the metre plus barramundi that nearly everyone seeks out) and quantity. Gavin New recently decided to base the business in the Gulf of Carpentaria to relish in the outback lifestyle, friendly community and to provide a sport fishing guided service that is like no other in the Normanton and Karumba region in the Gulf.

Whether you’re new to barramundi and sport fishing, or the absolute barramundi enthusiast, Carpentaria Barra & Sport Fishing Charters is the fishing experience you have been searching for…